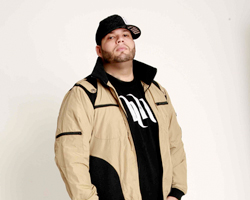 Originally hailing from the city that founded “Grunge Music”, DJ Triple XL decided banging your head and thrashing into people wasn’t for him and fell in love with hip hop and house music instead.

With his passion for music and fondness of night life, it was only natural for Him to start DJing. After a year of sleepless days and nights, he perfected his craft and most importantly, built up his vinyl collection enough to start DJing at local clubs. Straight out of high school he quickly made a name for himself in the “Night Life Scene”. Within the year he was asked to mix on the #1 radio station in Seattle, KUBE 93, and soon became an on-air personality. Best known for his “quick mix”, DJ Triple XL was able to take crates of records and quickly cut in and out of songs creating a new sound for his listening audience. Always inspiring, DJ Triple XL challenged his listeners by pushing the limits! and breaking new artists. People loved it and his time slot became #1 and stayed for many years.

He set his sights on a fast paced New York City that introduced him to the life as a “Celebrity DJ” before ending up in LA, City of Angels. Now mixing for L.A.’s #1 Hit Music Station 102.7 KIIS-FM, DJ Triple XL has made a splash on the Hollywood scene. Becoming personal DJ to Various Celebrities, he’s djed and held residences all over the United States and Internationally, bringing his refined style and ability to the masses. With his pure passion and understanding of music, he keeps his ear conscious of what the crowd wants to hear. DJ Triple XL will take you on a roller coaster of music euphoria. Always turning out consistent and high energy performances, there’s nothing he can’t do. And throughout it all, DJ Tiple XL has stayed true to himself.

When he’s not mixing for the radio, you can catch him on stage personally djing for artists anywhere from the Jonas Brothers and Diddy. You may also see him opening for music veterans like Jay Z, Snoop Dogg, and Ciara. Playing exclusive nightclubs such as Playhouse Los Angeles, Tao Las Vegas, and Liv Miami or private events for Playboy, GQ, NFL, Sean John, T-Mobile, NBC, NBA, or any one of the many movie and TV wrap party he has done.

For the last 15 years, DJ Triple XL has been a pioneer and talent that can’t be reckoned with. He won’t stop and can’t stop because DJ Triple XL is living his DREAM.