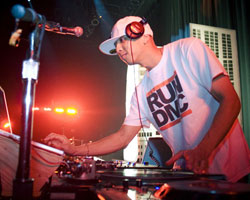 Raised in Los Angeles, Joseph Gettright ran the streets of LA since he was a kid. He spends much of his time, deejaying and listening to music. With music influence from all over the world in Los Angeles, his style is a unique blend of many genres. Getting off to a late start in his deejaying career, (after developing his reputation as a party emcee and hype-man) he is described as an underdog deejay. Putting together his hype-man schooling along with his musical selections, his set will have you dancing the night away.

While working for LA radio station Power 106 FM, he has had the opportunity to open shows, emceeing and deejaying for artists, Ludacris, Lupe Fiasco, Ciara, Mario, Dazz Dillinger, Three 6 Mafia, 2 Live Crew, Lil, Mama, Mims, Roscoe Umali, The Far East Movement and Katt Williams. Along with these experiences, Joseph has had the joy of hearing some of his own song edits and mash-ups played over the airwaves in LA. Look for his podcast and mixtapes circulating around a city near you.