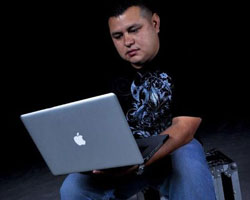 After being exposed to DJing in 1988 by his cousin, DJ Ron knew it was his dream to be the one in the Dj Booth rocking the crowd. Instantly, he began spending countless hours learning the art of djing and working closely with his cousin who took the time to explain and show him what djing was all about. DJ Ron has always been told that he has an ear for music, so it is no wonder how his mixing style caught the attention of clubbers, club owners, and promoters as he grew older and shortly after it turned into a 5 night a week DJ Career at some of the biggest, most respected clubs. DJ Ron has held some premier residencies and guest DJ spots at every dance club in the Inland Empire to Los Angeles. This has allowed him to open up and play along side numerous world renowned DJs and many other headlining DJs. In 2009 DJ Ron became a weekend mixer for The Flo 93.5 FM on Saturday Nights. DJ Ron has built a reputation of being a DJ to rock any genre of music and has kept the a dance floor moving all night long. It has been a life long passion for the music that has made DJ Ron one of the best DJs around! In addition to clubs DJ Ron has estabished himself as a good moblie DJ for any event from weddings to school dances.