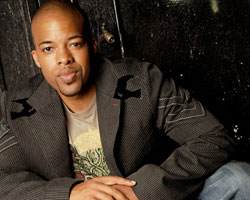 Anthony “A-One” Morris started his DJ career while he was a student at the University of California, Riverside. He majored in Theatre Arts/Production and jumped right in at 88.3 FM KUCR, a college radio station on campus. A-One made his first impression on listeners and built a fan base during his highly rated Sunday afternoon radio slot. His college radio mix-show gained recognition and praise, and A-One would soon infiltrate the professional radio industry.

A-One started professionally by earning an internship at KKBT-FM 92.3 The Beat in Los Angeles. Before long, A-One had moved up the ranks from the promotions street team to a part-time on-air personality and dj. After receiving his Bachelors Degree in 1999, A-One would eventually move on to co-host one of the top rated afternoon drive radio shows in Los Angeles, The A-One and Spinderella Show. A-One’s radio show successfully ran for over three years until the station decided to flip music formats in 2006.

After leaving behind The A-One and Spinderella Show, A-One decided to continue his radio and dj career independently. When time permits, A-One pulls some part-time shifts on 99.1 FM KGGI, a Rythmic/Top 40 radio station in Riverside, California. He can also be heard on radio ads and television projects including the hit animated series Family Guy. A-One also hosts an internationally syndicated radio show for Coca-Cola in more than 26 African countries. If that’s not enough, don’t forget to catch A-One as the DJ on Comics Unleashed w/ Byron Allen, which airs late nights on ABC.

Despite his radio activities, DJ A-One constantly returns to where it all began — working as a DJ. The list of his guest appearances reads like a Top Ten of the most popular event venues, with hundreds of DJ gigs a year. A-one has been apart of Soundskilz Entertainment for the past 10 years where he has been a great asset. He has a great deal of talent and personality, and always brings his A-game to Soundskilz Entertainment events.